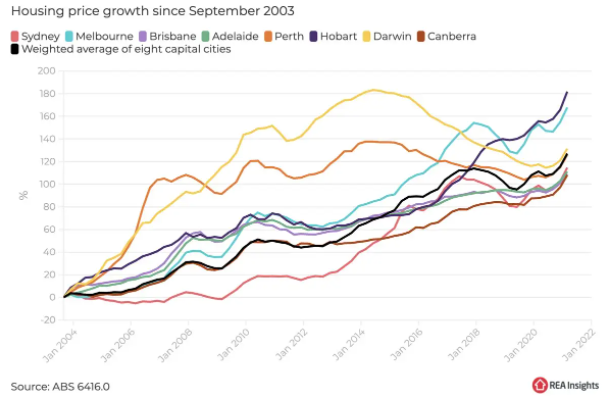 Our property markets are booming around Australia so it’s no surprise that people are complaining housing is unaffordable.

Only last week Corelogic reported that the strong growth in dwelling values was led by houses, which rose 15.6% over the last year, compared to a 6.8% lift in unit values.

So is housing really unaffordable?

Ryan explains that accounting for the increase in the prices of all goods, as well as reduced interest rates, “real” mortgage repayments have only increased by about 22% since 2003 despite housing prices more than doubling.

Ryan’s analysis shows the level of housing repayment costs is actually at the same level as in 2007.

What this means is that property values are going to continue increasing since housing repayment costs are significantly below the levels of 2010.

A.B.S statistics show home prices in each of our capital have more than doubled since September 2003.

In aggregate, prices in the eight capital cities are up 116%.

He says that obviously, the cost of many other goods has gone up during that time as well because of inflation.

Having said that, housing has increased by about 50% more than the increasing cost of other goods (the rise in inflation) over the past two decades.

However, in Melbourne and Hobart, real housing prices have increased by 80 to 90%.

At the same time, the cost of borrowing has fallen.

While property prices have been rising, the cost of servicing the mortgage has dropped to historic lows.

This means capital city mortgage repayment costs are at the same level almost 15 years ago.

So what’s the fuss about affordability?

There’s a big difference between serviceability (the ability to repay your mortgage) and affordability which is in part related to being able to save a deposit.

While established homeowners who are upgrading to the market bring a “trade-in” to the market, first home buyers are having difficulty saving a deposit fast enough for the rise in home prices.

Ryan explains that for First Home Buyers (FHB’s) it is accessibility, not affordability, that has worsened; as interest rates have fallen, and prices have increased, the burden of saving a 20% deposit, as well as paying stamp duty (that is an increasing proportion of selling prices), has become increasingly heavy.

Of course, recently have been a number of policies have been introduced to help reduce the deposit burden for FHB’s.

Next time somebody says housing is unaffordable, remember that repayments are much less today than they would’ve been a decade or two ago.

And considering affordability is still strong, especially for established homeowners planning to upgrade, this property cycle will continue for some time yet.

However, things will get more difficult for first home buyers as the various grants and incentives disappear.

Now is the time to take advantage of the opportunities the current property markets are offering.

Sure the markets are moving on, but not all properties are going to increase in value. Now, more than ever, correct property selection will be critical.